TL;DR: I made this thing: Minecraft design tool

My girlfriend bought me the ever-so-popular indie game ‘Minecraft’ for my birthday, even though I kept saying I would never play it. I tend to get obsessive over certain thing; mostly things that involve creating, building, which is all Minecraft is about. After having seen her play it for quite a while however, I decided to give it a go anyway, as it looked like far too much fun to be left alone. As expected, I did start to obsess over it, once I got everything down properly (which was rather soon since the game is really easy to play).

Since Minecraft also has a multiplayer mode, my girlfriend and I were soon playing together in our own virtual world. After a while we started building things together, which was and still is endless fun. However, when you just explain your idea of what you want to build, there sometimes is a bit of miscommunication, and one or the other starts building things in a way that wasn’t intended, because they misunderstood. Needless to say, this happened a couple of times, with mutual frustration as a result.

A simple drawing on a grid can greatly help explain what you mean, I thought; thus, I got to work. I decided to quickly throw together a tool that lets you draw things in 2D, with Minecraft material sprites. I built it with the tools I’m most experienced with; namely HTML, CSS and JavaScript. 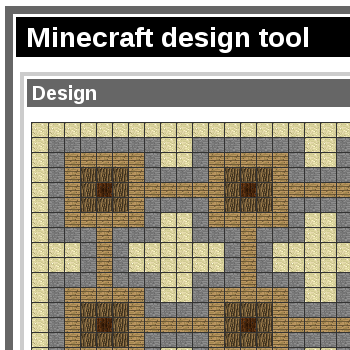 The tool simply uses a table as its grid. I realize that a drawing isn’t quite tabular data, but it seemed the best way to go for it. Since I used HTML5 to make it, I know I could just have used the <canvas> tag, but I’m afraid I don’t have quite enough experience with that one to build something with it quickly—which was mostly the goal here. That and the fact that canvas is one of the things that can’t really be used in older browsers, so it would effectively NOT work there, made me decide to use a table.

I kept the tool very simple and to the point, because all I really wanted was a quick design tool that let you share your designs with others. It isn’t quite the prettiest as it is, but it’s functional, and that’s what matters… to me, at least.

The first version I put up did not have a save button, as it was pure HTML, CSS and JavaScript. To share a design, you had to use the export function, paste the exported data (which is in JSON-format, for those interested), copy the output to your Minecraft partner(s), and have them import it again. Since this is a rather tedious way of sharing designs, I built the PHP part later, which saves a design under an 8-character ID. This way, you can just copy an url the conventional way, and the design will be loaded straight away. For those who still have an exported design sitting around somewhere, you can still import it and save it online.

Seeing as there is no account system or anything, you can’t save to the same ID; you always save to a new one. This prevents people from vandalizing others’ designs. (Or griefing, if you prefer the popular Minecraft term).

Since I made a PHP part for it, I’m planning to expand on that. One nice idea I have is to build an actual image generator; PHP would simply combine the sprites into a single image and make it available for download as a PNG.