Yesterday, the kitchen furniture was delivered. The store where we bought it from sent 3 guys with it to install all of that, which has been done in one day.

There are still quite some spots that need to be finished up (painted, or tiled), but I must say, It’s looking pretty amazing already. Let’s move on to the pictures, shall we? 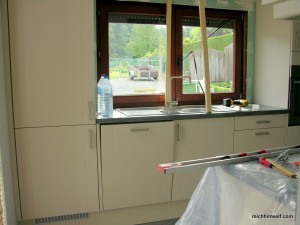 Here’s a first view. On the left is the fridge and the freezer (the fridge is on top), neatly built in. Then, the dishwasher (woohoo), and some other cupboards.

The sink is also on that side of the kitchen now, so you can work with daylight, rather than face a wall. 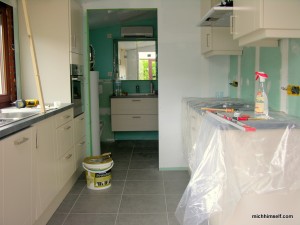 A look towards the bathroom. On the right there’s the stove. This one is mainly to give an overview. 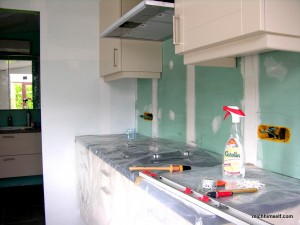 A closer look on the right side. It’s covered in plastic because we still need to have that wall tiled.

The stove is right in the middle, rather than crammed into the corner on the left as it used to be. It’s a a gas stove again, because we prefer the instant heat of fire over the relatively slow warm-up of an electric one. 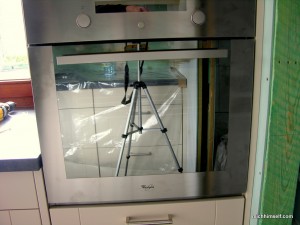 We’ve got an oven now! This’ll make for yummy food in the future. The glass is rather shiny, as you can see it mirrored my tripod. It’s still a bit dirty, as is all of the new furniture, but that’s simply because we’re still working in there. Once it’s done we’ll give it a decent cleaning. 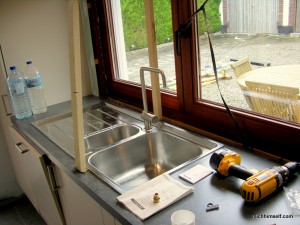 A view of the sink. The pieces of wood you are there to keep something in place above the window. 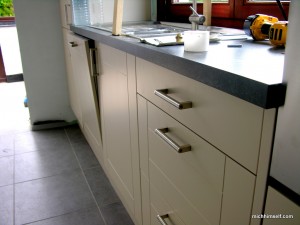 A closer look on the cupboards. I really like the look of the handles. What’s also fun is the way those drawers close; you can give them a firm push, and they’ll slow down when they’re nearly closed, to then slowly finish the motion. 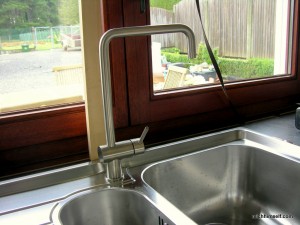 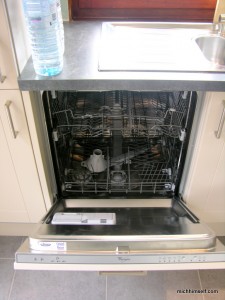 Finally, we have a dishwasher. After all those years, I slowly got tired of doing the dishes manually. 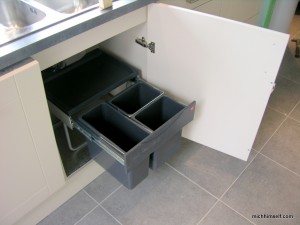 In the cupboard under the sink, there’s this neat combination of bins that slides right out. That should come in handy. 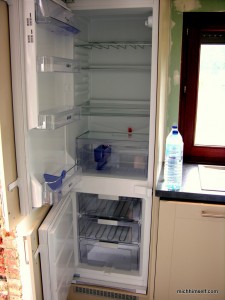 Here you can see the fridge on top, and the freezer on bottom. We used to just have a standalone fridge and freezer (which have resided in the living room for the past month), but those where just stacked on top of each other. This looks neat, as it’s nicely built into the cupboards. 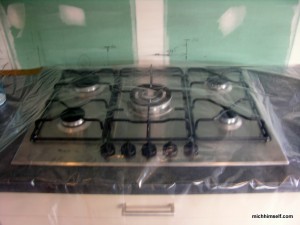 The new stove. It’s a gas stove with 5 panels. (or what are they called?) It appears it’ll be more comfortable to cook on those instead of the old ones that were crammed into a corner. 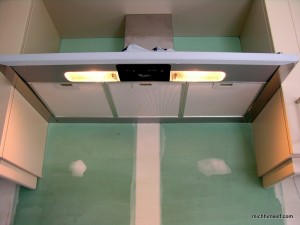 The ‘extractor hood’. (Apparently that’s what it’s called in English). Looking decent to me. The filters are easy to take out, and if I’m not mistaken, you can even wash them in the dishwasher. 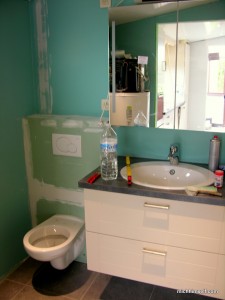 A look into the bathroom. Quite some refining is left to be done here. The cupboard you see is rather nice, it has TL lighting on the inside, which shines through transparent strips on the edges of the mirrors. 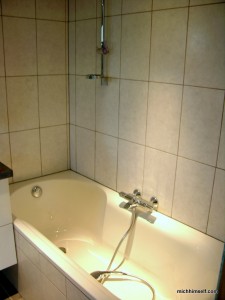 The bath/shower. I absolutely cannot wait until we get the green light to use it, as I’m sick and tired of washing myself with a tub of water. 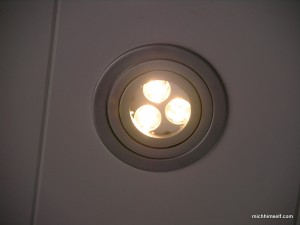 There are LED spots built in everywhere in the bathroom and kitchen; and I must say that they’re certainly bright enough. They’re warm white LEDs, otherwise everything would look.. yeah, cold.

That wraps it up for that photos. I like how the furniture is quite a bit higher than the previous set-up. There used to live quite little people in this house, so naturally, pretty much everything was pretty low. Since we’re a relatively tall family, that’s quite annoying, as it causes us to have to bend over a lot. This’ll be more comfortable.