I decided to split this whole mess in parts, as otherwise, we’d eventually have so many photos on one page that it’d take too long to load.

Day 2 of the renovation, August 4th.

Today, the guy that’s doing all this let us know that there’s actually no concrete under the kitchen and bathroom. The two rooms where built separately, after the rest of the house was built, and apparently, they though it was al right to just build it on the ground, with no support under there. We’re lucky we didn’t have any water problems in there earlier, actually; or worse, the ground could’ve moved away due to ground water – which could’ve caused walls to break etc.

This new discovery means that everything will take longer than expected. We’ve got a whole lot of sand to get out there, so we can add a good layer of concrete before we go on with building in the new kitchen stuff. There’s still some work left until we get there though.

Today the wall between the kitchen and the bathroom was broken down, among other things. The bad-ass part is that this wooden wall was mostly cut down with a chainsaw.

Onto to the photos. 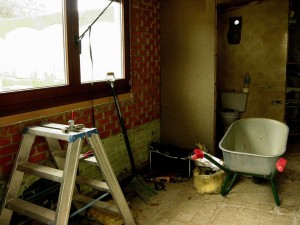 Part of the wall to the bathroom is gone. The floor has been stripped from its layer of something similar to vinyl, but I can’t think of the name. 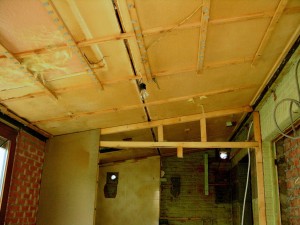 The wooden plank ceiling has been removed, and we’ve got a typical small light bulb hanging there. 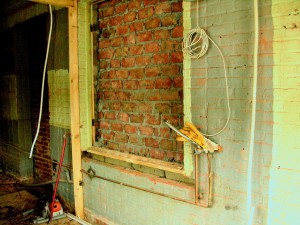 This was hidden behind the stuff that covered the wall. There had once been a window, which had then, in a messy way been closed up. To close up some holes in there, newspapers have been used. I examined one of those I found in there, and it turned out it was back from 1960. The stuff had been in there for 50 years. 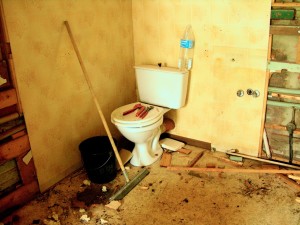 The bathroom. As you can see the little cupboard with the sink is gone, and the wall is partly torn down. The toilet is actually gone as well now, but I took these photos around noon. 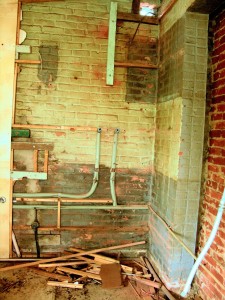 This is where the shower used to be. You can see a lot of wood, which are mostly leftover from the wall coverings. 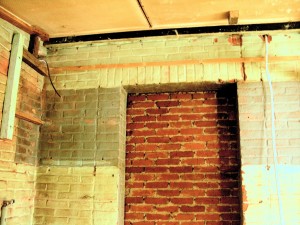 In the kitchen we encountered a window that had been closed up, in the bathroom we found a whole doorway. This’ll need some extra bricks to fill up the wall.

Edit: My sister just pointed out that the house was actually only built in 1960. The piece of newspaper I mentioned earlier had been in there since the house was built. Sorry for the misinformation. This wall was an outer wall up to 1985. 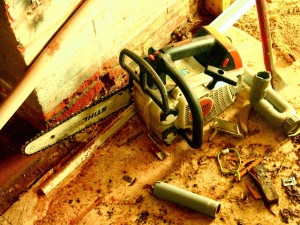 This chainsaw was used to break down most of the wooden wall between the kitchen and the bathroom. We had opened the window widely, but it was still stinky. The thing runs on petrol if you hadn’t noticed.

Anyway. I’m already getting slightly stressed out by this renovation, even though we’re only two days in. We had to move everything from the kitchen (plates,cups, etc) to the living room. Because of this, I always take a while before I can find what I need, which is annoying. That aside, the water has been shut off for now, as some tubes need to be closed off first. Now we’ve got to use water we’ve got in buckets for ‘flushing’ the toilet, washing hands, et cetera.

Of course we don’t have a shower either, so it’ll be tough to feel clean. The only option is to just wash ourselves at the sink upstairs. Bah.

Oh well, I figure that if I help out as much as I can, the renovation will progress quicker. The little surprises we’ve run into today make the outlook on it just a bit worse though.