Today, I decided to fiddle with things a bit.

We had these LED spots in the house, just like these (random google images find), but they broke pretty fast. When I had replaced them with regular halogen spots again, I decided to see what’s inside them, and see if I could perhaps find what’s wrong with them.

It turned out there’s a simple circular PCB with a sort of high-power SMD LEDs mounted on there. In the other part of the spot, there’s a small transformer circuit, which, as it turned out, is what’s broken. I test the LED board separately, and found that it just runs on a typical 12V DC, which is why I decided to do something with them.

I’m not going to bother trying to get the broken circuitry back to work, though.

Anyway, I got the idea to replace the halogen lamp of my desk lamp, with the LED part of the spot. I took some pictures, so you can have a look. 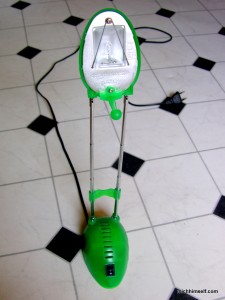 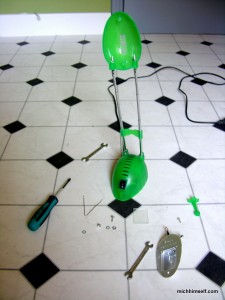 I screwed out the metal fitting for the halogen lamp, and disconnected the wires from the terminals on the bottom of the lamp head. 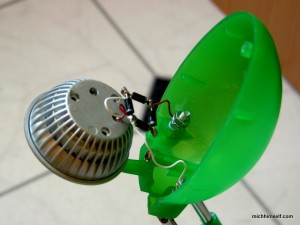 And that’s a look of how it’s currently wired up. The original lamp was a plain halogen lamp, so it just ran on AC. I obviously didn’t want to connect that to LEDs, so I made a rectifier. I firs made a single wave rectifier with a single diode and a capacitor, but the result was a perceivable flicker when the light was on. That diode and capacitor are still left inside the spot, on that note. The diode adds an extra 0.7 V that’s subtracted from the source voltage, which is a good thing, as the mean voltage was slightly too high. Having the Graetz bridge and the extra diode in there, I subtract 2.1 Volts of the source voltage, which warrants a longer lifetime for the LEDs. 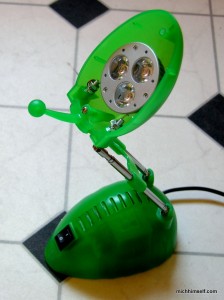 The spot mounted in there. I think it doesn’t look too bad, even though the head isn’t really enclosed properly. It’s held in place using a screw, as you can see in the last picture. 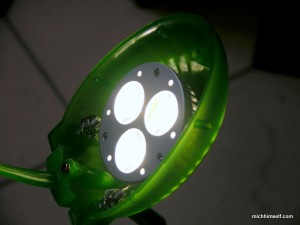 Fired up. This is much brighter than the original halogen lamp, while requiring less power. 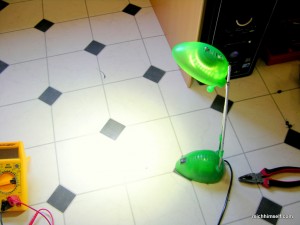 Another look of the light, and the screw I mentioned. You can see it’s rather bright, as this was taken in rather bright daylight.